Fire Salamander in The Packing House 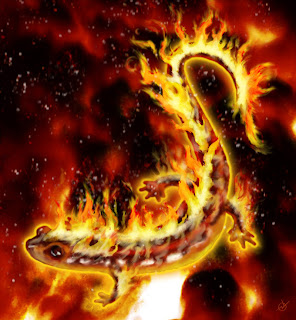 Ray Bradbury, in his early dystopian novel, Fahrenheit 451, described a fiery future where books are burned and banned. Guy Montag, the thinking fireman, must choose whether he accepts this future, or rejects it for another. Within the flames of a book bonfire, Montag has an epiphany, setting him on a course that drags the reader through the flames of the rest of the book.

The first section of this book is called, The Hearth and the Salamander, and makes reference to Montag's "professional symbols": a salamander on his arm and a phoenix disc on his chest. Clearly an allusion to the fire salamander of myth, the creature is known to have an affinity for fire and often has been associated with the attributes of a fire elemental.

In The Packing House, Joel is a sixteen-year-old plagued by recurring nightmares, many of which have connections to fire. You'll have to wait for the book to know these specifics, but there is a distinct reference to the fire salamander, as depicted in the stunning artwork by Onzamano above. In fact, there is also a reference to several books the MC reads throughout the novel.

Care to make a wager as to one famous novel in particular referenced in The Packing House? Here's a hint: read chapter one, which is conveniently posted at the top right of this blog, and see for yourself. I am confident you'll sort it out right away. Just stick your hand in the fire and don't get burned.
Posted by G. Donald Cribbs at 6:01 AM