To begin, I'd like to welcome author, Kandi J. Wyatt, to the blog to discuss her latest reveal in the Dragon Courage Series. Welcome, Kandi! 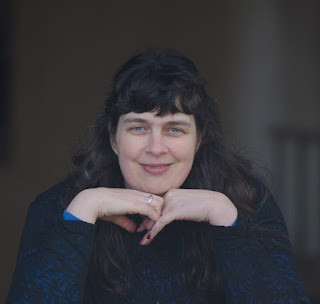 Author Kandi J. Wyatt
Author Bio:﻿
Even as a young girl, Kandi J Wyatt, had a knack for words. She loved to read them, even if it was on a shampoo bottle! By high school Kandi had learned to put words together on paper to create stories for those she loved. Nowadays, she writes for her kids, whether that's her own five or the hundreds of students she's been lucky to teach. When Kandi's not spinning words to create stories, she's using them to teach students about Spanish, life, and leadership.
Find Kandi elsewhere on the web:
Website | Facebook | Twitter | Instagram | Amazon
Before the Cover Reveal of Dragon's Posterity, Book 5 of the Dragon Courage Series, here's a quick recap of the first books in the series. Click the book titles to get your own copy, some at discounted rates (99 cents) as a part of the cover reveal and book launch. 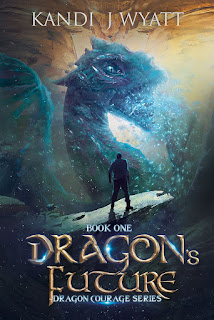 Every child of Woolpren dreams of becoming one, but only a few are chosen. Now, ten-year-old twin brother and sister, Ruskya and Duskya, have been selected to join an elite group of riders: dragon riders. Full of awe and excitement, the twins leave their mother, and their home, to train for their new lives.

Fifteen years later, dragons are becoming extinct and riders are rare. One day, Ruskya is at the general store in town when a man announces that he is recruiting new dragon riders. Ruskya goes undercover, and discovers that there is another colony of riders with their own agenda--a quest to find a mysterious plant that could restore the dragon population, or destroy it. When a battle erupts between the two colonies, it's up to Ruskya and his friends to fight for their dragons' future, and their lives.

Follow Ruskya's quest as he finds courage and friendship in this exciting middle grade fantasy series by Kandi J Wyatt. 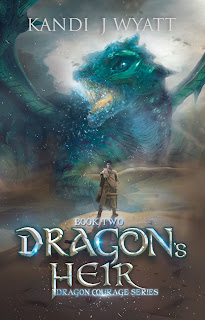 In the ten winters since Kyanos was defeated, Rider Braidyn and his dragon, Turqueso, have made a place for themselves in the sleepy Boeskay colony. But when two nestlings are stolen from the hatchling cave, Braidyn’s sense of justice leads him on a quest to find the person responsible.

After recovering one nestling, Braidyn recruits his old friends Ruskya and Carryl to help. The friends travel to a faraway desert colony where they find a group of riders with different customs, and meet a beautiful young woman who could be the key to finding the missing nestling. Can Braidyn learn to temper justice with mercy, or will he risk losing everything?

Journey along in this exciting fantasy world in the spellbinding second installment of the Dragon Courage series, Dragon’s Heir, by Kandi J Wyatt. 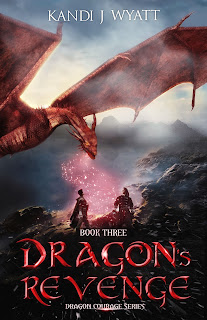 In search of his place in the world, Kyn visits his new friend, Ben’hyamene. Together, they meet an ailing dragon rider from the marshes of a land called the Carr. The rider recounts a people beset by anger, depression, and despair. After befriending and healing the rider, the group travels to the rider’s home. There they discover a breed of wild dragons, called drakes, which have been at war with humans for four hundred years.


One sleepless night, Ben’hyamene uses his new abilities to communicate with the lead drake. This sets Kyn and Ben’hyamene on a path that could bring peace to a conflict that’s nearly destroyed a whole people. Can revenge be set aside and enemies be called friends?

Find out in the exciting third book of the Dragon Courage series, Dragon’s Revenge by Kandi J Wyatt. 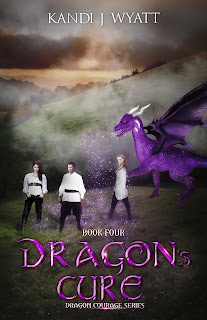 Serena’s been hurt before, but not like this. He had gone too far this time, and she knew it. When she sets out on her own, she’s unsettled by the ominous noises that seem to follow her. Scratches and huffs that couldn’t have been made by any animal she had ever heard of. With wonder, she discovers that the noises are not the stuff of nightmares, but a baby dragon. And along with it, an intriguing dragon rider named Carryn.

While Serena begins training as a dragon rider, she struggles to trust her trainer and her new friends, including her dragon. When her future is put in jeopardy by dark forces, Serena must fight her greatest enemy: herself. Can she fight through the past to form a true friendship and avoid being enslaved again, or will her distrust cause her to lose the security she so desperately longs for? Will bitterness be set aside and broken hearts be healed?

Follow the tale of friendship, courage, and hardships of Serena and Carryn in this powerful middle grade novel by Kandi J Wyatt.

(This is a middle grade novel, but has the subjects of human trafficking and abuse.) 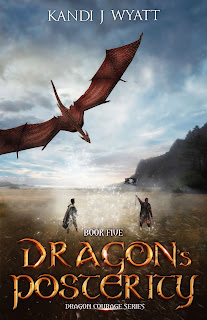 Is there really a right way to braid leather? Ruskya doesn’t know anymore. Is it worth fighting over? Twenty-one winters ago, he was ready to take on the turquoise dragon rider, but now he fears facing his oldest son.

Kyn, Ruskya’s youngling, wonders if he’s going crazy when an image begins haunting his dreams. Soon, he realizes it may be the key to helping not only Ruskya and his son Ardyn, but all younglings and their trainers as they adjust to growing up.

Will Kyn be able to help Ruskya, Ardyn, and the other young riders? Follow your favorite characters from the exciting Dragon Courage series as they empower the next generation and give dragons to their posterity.

Before you go, don't forget to comment below with your favorite cover in the series, and what makes it your favorite of the five. Thanks for stopping by. Good luck! I hope you win.
Posted by G. Donald Cribbs at 5:53 PM No comments: Links to this post