It's summertime! The perfect time to get away, take a quick vacation to your favorite beach, with a few good books to read UNDER THE NEVERending summer SKY. See what I did there? Well, I just recently finished reading this gorgeous love story of how opposites might repel at first, but if you flip them over, sometimes they attract in a way that cannot be separated. I think you'll find that with Veronica Rossi's debut, Under the Never Sky, and I'm so convinced, I thought I'd offer you a chance to have this book for your very own, just in time for a summer getaway!

For those who are just here for the contest, scroll on down to the rafflecopter entry form below. Skip right on past the exclusive new interview Mrs. Rossi was so kind to do for this giveaway. Pay no attention to the gorgeous video clips, book trailer, or concept art on your way down the page. Just get to the good stuff and ignore all the amazing details Veronica Rossi and I cooked up for you.

For those who want more, or don't know much about Under the Never Sky, please sit back and enjoy the content I've gathered for you and be sure to take advantage of all the Under the Never Sky goodies that are here. Believe me, after you read this, you'll be salivating for Through the Ever Night, Book 2 in the series, and Into the Still Blue, Book 3 of the trilogy.

To begin, take a look at this video interview that explains where she got the concept for Under the Never Sky. It's a pretty neat story, and her inspiration is definitely near and dear to her heart:


Veronica Rossi graduated from UCLA and studied Fine Art at California College of the Arts in San Fransisco. When she began researching for Under the Never Sky, she gathered pictures, images, music, and other elements to experience the world she created in a very hands-on, kinesthetic approach. She commissioned artwork for her world from Richard Dumont, the most riveting of these being the Aether Sky and Perry image below: 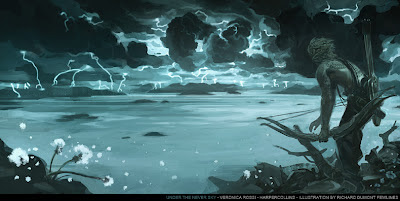 When I came up with the idea of hosting a giveaway at the beginning of summer, I wanted to make sure it was a good one. In fact, I've got another one planned shortly after this one is over, and it's an equally gorgeous book from an equally gorgeous writer, one who's close friends with Veronica Rossi. Oh, am I not giving you enough hints? Well, if you follow them on Twitter, you'll see them gushing over each other and the next giveaway is also the first book in a trilogy. Still can't guess? Well, I guess you'll have to come back and find out for yourself.

If you haven't had a chance to read my review of Under the Never Sky, check it out HERE.

I contacted Mrs. Rossi and asked her if she'd be willing to answer a few questions with me, and I could include a new interview along with the giveaway. Since Mrs. Rossi was gracious enough to respond to my inquiry, here is the interview we had about her writing and thoughts on Under the Never Sky. Of course, for the most up-to-date information, you should visit her website:  http://www.veronicarossi.com/

Under the Never Sky almost immediately reminded me of Lord of the Flies, by William Golding. It has the same gritty, harsh quality as the outer wasteland coupled with the aloof boredom of Reverie. Would you agree with this allusion? What other connections to classic literature might readers make, especially pertaining to Aria and Perry?

Thank you, Donald. I read Lord of the Flies many years ago but it left an unforgettable impression on me. I’m so flattered that UTNS reminded you, in some way, of this timeless classic. There’s a lawlessness and just-beneath-the-surface aggressiveness to the Outsiders that might bear some similiarity to that great classic (I feel utterly presumptuous saying that, I have to let you know.) I do think there are themes in UNDER THE NEVER SKY--star-crossed lovers, societies at war, sibling rivals—that can be found in stories through time.

Having thought on this point a bit more, I would also add that Under The Never Sky is a futuristic dystopian cocktail of Beauty and the Beast (minus the fairytale) meets Taming of the Shrew. Regardless, it's an amazing book, and an amazing read!

What first drew you to the story of UtNS and in particular, to your characters?

I knew I wanted to tell a story about contrasts … about opposites. Boy/Girl. Advanced/Primitive. Authentic and sensory/Synthetic and simulated. I think that was the initial interest for me: putting these opposing forces right next to each other, and seeing what would happen.

Will there be more to the story in another book or two? And, if you could write from a perspective other than Aria or Perry (as you did in the book), which character would you want to explore more? Why?

There will be two more books. Book Two, THROUGH THE EVER NIGHT, will be released in January 2013. Book Three, INTO THE STILL BLUE, does not yet have a release date, but is expected to be published some time in 2014.

I have written extensively from Cinder’s POV, and Roar’s. I like to know what it feels like to be inside the heads of my secondary characters. If I had the time, I’d write from all of them. It’s terribly fun, and very useful.

What are your typical writing habits when coming up with new ideas for stories? Do you research? Write a few rough scenes? Play with dialogue or voice? Outline character traits and backstory? Please share a typical writing day.

I’m actually developing a new series right now. The development stage is one of the most frustrating and exhilarating parts of the writing process for me. I spent weeks just reading, taking walks, brainstorming, free-writing, and generally alternating between feeling like, Ah ha! I’ve got it! to What the heck is this story about?

The genesis of every story, for me, has been different. With NEVER SKY, the characters and world evolved simultaneously. With this new project, I’ve got a great handle on the characters, but the story is still murky. I wish it were a similar process every time, but I suppose that’s part of the fun—not knowing exactly how things will unfold.

A typical writing day involves procrastination. That’s just about the only constant for me. I’ve found that if I can write first thing in the morning, I’m happiest. Middle of the day is the worst for me. I’m at my most productive early and late. And, yes, I do all of what you’ve listed above!

Where do you see yourself and your writing in 5 years from now? In 10 years? Will your books be movies by then? What else might we get to see from you? Would you switch genres?

In five—and ten—years, I’d like to still be challenging myself. I’ve always needed to feel like I’m changing, learning, stretching as a person, writer, artist, so I’m reasonably sure that will still be true then. And I absolutely could see myself switching genres. Anything is possible ☺

It would be wonderful if my books were movies, but that’s not up to me. The folks over at Warner Bros. are in charge of making that happen.

Bonus Question: would you like to share any ideas for a dreamcast? What about an app or an interactive website/game, etc. could you envision for your stories?

I’ve been asked about dream-casting UTNS a few times before and I always struggle with this question. For me, the characters are VERY clear in my mind. Because of that, it’s really difficult for me to think of actors who I think “fit” Aria and Perry. The one thing I WOULD like to see, if the film was made, is the roles be given to serious actors—to artists with strong vision. I’d love to see Aria and Perry played by actors who took risks, and really made the characters their own.

Thank you very much for taking the time to answer these questions. I'm honored to share this giveaway with your fans and readers.

Thanks so much for having me! This was fun!


For those who have not seen the book trailer for Under the Never Sky, check this out. You won't be sorry you did! It's amazing, and I can already start fantasizing about who might be in a movie version, which is, as you know from the interview above, optioned for film by Warner Bros. I sure hope they bring Veronica Rossi along to assist with the creation of the movie version in the same way Suzanne Collins was involved with Hunger Games. Here's the book trailer:

Giveaway: 2 Hardcover Copies of Under the Never Sky to 2 Lucky Winners!


The 2 Hot 2 Read 2012 Summer Reads Giveaway is for 2 Winners, who will each receive a Hardcover copy of Under The Never Sky. If Veronica's swag shipment arrives in time, she'll throw in a surprise swag gift as well. She might even sign it if you ask her nicely!

Just enter using the Rafflecopter widget below, and good luck!

The contest runs for two weeks to give everyone a chance to enter, and once the winners confirm their addresses, the winners names will be posted right here, so keep checking back.

I wish you all a great summer with great vacation getaways, and good books to enjoy while you're there!

Thanks to Veronica Rossi and HarperCollins for the great giveaway!

This giveaway is for US residents only. There will be International giveaways again soon.

Entries into the Giveaway will be checked for validity. Entries that have not completed requirements will be voided. To put it simply: please be honest.


Winners have been notified and confirmed via email. I'll be sending out their books asap. Thank you to everyone for reading the blog and entering. I appreciate those who tweeted and came back often to spread the word. I appreciate each of you for following me and I hope you enjoy this blog.

As I hinted above, a new giveaway starts before the end of July, and it's for one of my TOP READS OF 2012. Plus, I'll be featuring a post all about STORMDANCER, including my entry for an autographed copy of THE VERY LAST ARC directly from Jay Kristoff, the author himself. Oh, and I drew a sketch as part of the entry...will you throwdown and enter for your chance to win? I warn you, I'll fight hard for this one!


a Rafflecopter giveaway
Posted by G. Donald Cribbs at 6:09 PM