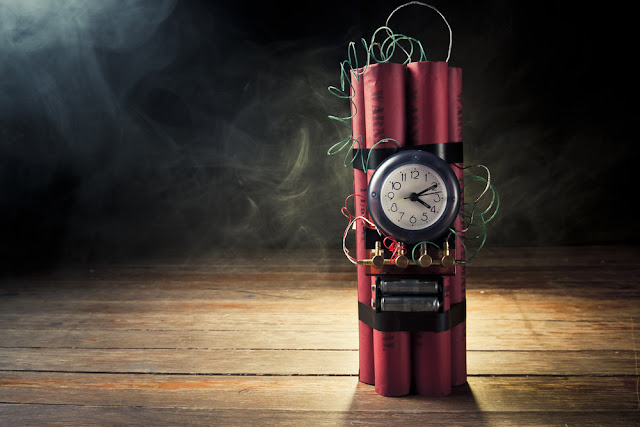 By itself, trauma is devastating. Trauma originates outside of the victim who receives it, yet it is passed to the victim, who bears the aftermath and the consequences. This is unfair to say the least. Sometimes trauma occurs as the result of a natural disaster, or a as a direct result of war. Most often, however, trauma originates from an abuser, an individual whose bad decision(s) affect(s) the victim for the rest of her life (and sometimes his or their life).


The victim, who did not cause the trauma, but as a result of being in the recipient role of the trauma, must shoulder the burden of that trauma for the rest of her life (see parenthetical citation above for all pronoun references). This plays out in the daily aftermath of the trauma in intrusive memories, visceral flashbacks, obliterating nightmares, and surges of overwhelming emotions. Each occurrence shreds through the victim like a hail of bullets strafing their flesh and vital organs. Sensory overload is a common side effect. There are often accompanying physical and mental health symptoms as well, depending on the age of the victim as opposed to the age of the perpetrator. None of these are fair.


But wait, it gets even worse.


The abuser, whose decision to act on their own urge and perpetrate the abuse often gets away without consequence and can abuse again and again. Abusers often silence their victims, passing the blame to the victim as if they caused the trauma, and with shame as an alibi, the victim accepts this transaction without realizing in that moment (or perhaps in treatment or recovery much later) that the responsibility lies with the abuser, not the victim. This is a secondary layer of abuse, wrapped around the initial abuse that can grow into a quagmire of confusion, anguish, and deception that makes recovery from trauma incredibly complicated. 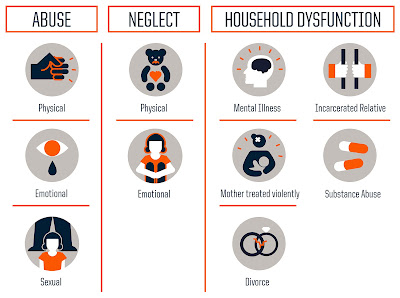 Trauma attacks the victim. In her body, this presents as physical symptoms. In her mind, this also presents as mental health outcomes the victim would not otherwise have incurred. And, according to the seminal study of Adverse Childhood Experiences (ACEs) by Kaiser Permanente of more than 17,000 participants, exposure to ACEs have direct correlation to these physical health and mental health outcomes in the lives of trauma survivors. For more details and specific data on this topic, see www.acestoohigh.com or www.acesconnection.com. Both websites provide access to the 10 question ACEs study (what the victim survived) as well as the 14 question resilience study (how and why the victim survived) to better understand how ACEs impact the victim. Dr. Nadine Burke-Harris’s TedTalk is another incredible source of understanding for how ACEs affect victims of trauma (https://www.youtube.com/watch?v=95ovIJ3dsNk). 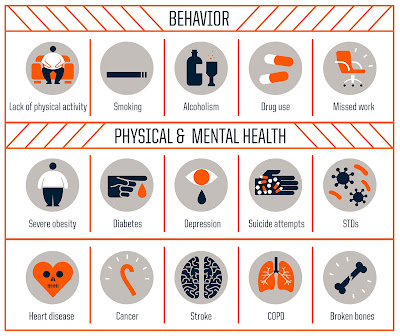 Now for the worst news of all: The Ticking Time Bomb.


The victim of trauma suffers greatly in the aftermath of abuse. It can last decades for the victim. An entire lifetime. But trauma doesn’t stop at the physical or mental health level. It actually goes down to the cellular level. According to The National Institute for the Clinical Application of Behavioral Medicine (www.nicabm.com) , a pioneer of experts in the trauma treatment and recovery field, trauma that is unprocessed will actually attack the survivor in the DNA of their cells. Read that again.


In their Treating Trauma Master Series, NICABM details how unprocessed trauma attacks the victim in their DNA, resulting in the very physical health and mental health outcomes cited earlier. In addition, this can lead to a shorter lifespan, when untreated, and unchecked. Specifically, this occurs in the coating around DNA, the telomere (see below for further explanation). The reason this can be so devastating to trauma survivors, has to do with self-preservation. In order to survive trauma, a victim often responds with a fight, flight, freeze (there are two types: brain freeze and numbing), or fawn response. 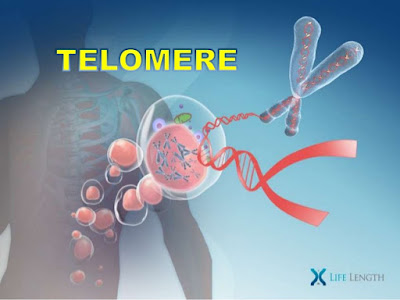 The brain goes haywire. The frontal lobe goes offline. The left and right hemispheres can sever, requiring treatment and recovery work that reconnects the severed halves. Trauma can impact the nonverbal part of the mind, requiring nonverbal/nonlinguistic treatment to heal those particular aspects of trauma (see EMDR, tapping, art therapy, dramatic arts therapy, neurofeedback/biofeedback, music therapy, etc. for appropriate avenues to address these areas of recovery from trauma). The fight or flight response also has chemical responses in the brain: the amygdala floods with adrenaline, while the hippocampus floods with cortisol.


This essentially shuts down the memory system of the victim. The amygdala must be restarted by grounding tools (which use the senses to reboot this part of the long term memory system), and the hippocampus becomes flooded by the cortisol, causing searing bits of memory, disconnected from the timeline of an individual’s life history, rather than a seamless “video recording” of the trauma events. The hippocampus acts like the news reporter, collecting the who, what, where, when, why, and how of memories. When flooded, the hippocampus is unable to anchor such details to the long term memory system, causing the trauma memory to store in the body instead of the mind, until it is fully processed.


Our bodies are designed to heal themselves while we sleep. Approximately every seven years, the body replaces all 15 trillion or 75 trillion cells (depending on whether one measures by weight or volume) during the repair process. This occurs while we sleep. That is why 8 hours of sleep per night are so essential to the health and wellbeing of individuals. When that individual is a survivor of trauma, their sleep is often disrupted by a plethora of side effects such as insomnia, hyposomnia, sleep apnea, sleep paralysis, nightmares, and related symptoms. This further underscores how the aftermath negatively affects a survivor of trauma, and complicates her treatment, healing, and recovery. In fact, for most trauma survivors, just getting started in these processes is exponentially challenging, as victims of trauma often believe they do not deserve treatment, healing, or recovery.


During the process the body uses to heal itself, at the DNA level, the two strands of DNA unravel, create a copy of the cell, and ravel back together. The telomere, a coating on the outside of the strands of DNA, hold the two strands together, keeping them from breaking apart in the unraveling and raveling back together process. One can visualize the telomere like the hard-plastic cover at the end of a shoelace. Those caps keep the shoelace from unraveling. Similarly, the telomere coating the DNA hold the DNA strands together, keeping them healthy and alive. Trauma attacks the telomere. The direct affect of trauma attacking the telomere, is that they become shorter, and eventually, this can cause the DNA to break apart during the unraveling/raveling back together process. What occurs then is alarming: the cell where the DNA breaks apart gets sick and dies. This is the specific reason why the victim of trauma suffers both physical health and mental health symptoms. They are caused by the trauma attacking the telomere, and those cells where the physical health and mental health symptoms occur.


Trauma only attacks the body when it is unprocessed. Thus, the ticking time bomb of unprocessed trauma can be diffused. This is good news for the trauma survivor, but one which must lead to eventually facing and processing the trauma, the very thing the victim of trauma strives to avoid at all costs. Unbeknownst to the trauma survivor, until now, is the fact that avoiding the processing of trauma actually leads to further consequences for the victim. 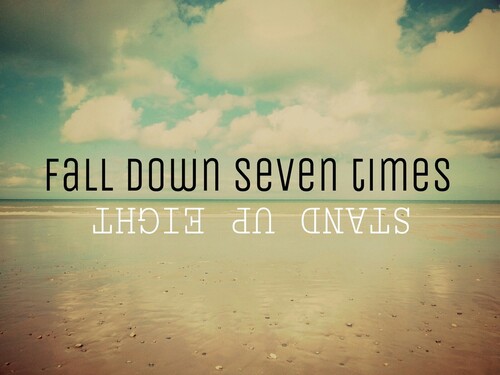 Survivors of trauma have incredible levels of resilience. When life knocks the trauma survivor down, she gets back up. An adage states: “Fall down Seven Times, Get Up Eight.” This is true for trauma survivors. It is an adaptation. Similarly, suppressing the traumatic memory allows the victim to survive the trauma, at first. Initially, this is considered an adaptive response to trauma. Dissociation is one example. This can also lead a survivor of trauma to consider addiction as a viable option to stuff or avoid facing the traumatic memory. However, repeating this adaptive response to trauma over time actually becomes maladaptive. What initially helps the victim to survive, develops into a barrier that gets in the way of her treatment, recovery, and healing.


This is where mindfulness becomes a key factor to begin the healing and recovery process of treatment for a trauma survivor. By staying present to the surfacing traumatic memory, and dealing with it in the moment it occurs, the survivor learns to do the opposite of suppressing and avoiding the trauma. This causes that trauma memory to become processed. Once processed, it no longer attacks the telomere, and the victim of trauma can reduce the negative outcomes of a reduced lifespan, physical health, or mental health outcomes. 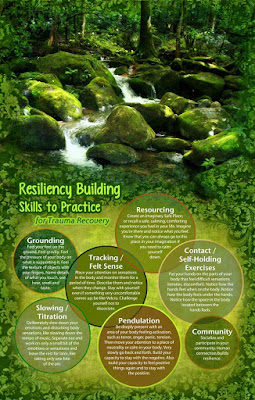 
Please note: Sensorymotor Psychotherapy has further application for the trauma survivor with Pat Ogden’s Window of Tolerance tool, available on the NICABM website in multiple formats. 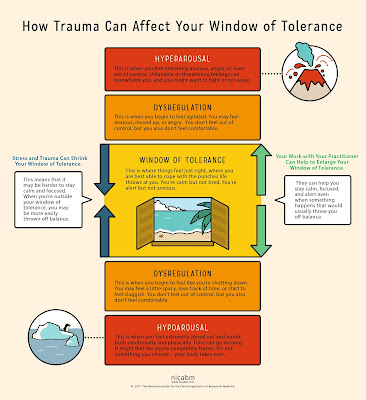 In conclusion, trauma is a horrific experience for the survivor. Walking out the aftermath of symptoms and consequences the victim did not deserve in the first place is challenging enough. But left unprocessed and untreated, trauma attacks the survivor, delivering even more debilitating consequences. Once the survivor of trauma has reached a point of recovery where they are partially healed, and able to begin the difficult work of turning and facing the unprocessed trauma, she would be wise to act on that sooner than later, utilizing such tools as pendulation to process the trauma, and move it from its suppressed location in the body, to the long term memory, where it no longer plagues the survivor on a regular basis. It is there, she can attain a level of recovery where she has her life back, and she can function without daily intrusive thoughts, memories, and physical or mental health symptoms.


Healing is possible. Recovery is possible. Finding the right treatment for the trauma survivor is personal and best led by the trauma survivor herself. It’s time to diffuse the ticking time bomb of unprocessed trauma. You deserve healing and wholeness. You never deserved the consequences your abuser/perpetrator passed off on you, like the world’s worst version of hot potato. You deserve to be free of the consequences of trauma. It’s time to cut the wire.
Posted by G. Donald Cribbs at 6:40 AM 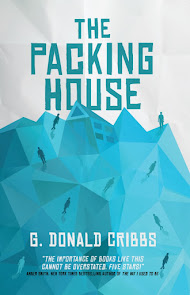 Pre-order Now on Barnes and Noble